Interview: Confessions of a 'Crash The Super Bowl' Winner (Pt 2) 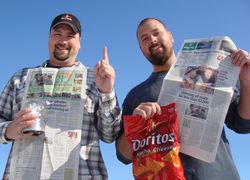 Call it the myth of the consumer-created Super Bowl spot.

In part two of this source interview with Joe and Dave Herbert for the new book, THE ON-DEMAND BRAND, the guys behind "Free Doritos," the first Doritos "Crash The Super Bowl" contest winner to top USA Today's Ad Meter, talk about the nature of "consumer-created" ad contests. In short: They're not really for everyday Schmos, though, in the case of Pepsi Max/Doritos contest, at least they're open to all comers.

In reality, pros may have the upper hand.

Past winners like "Live the Flavor" (guy crashes car while eying attractive  girl), "Checkout Girl" (cashier and customer raucously bond over Doritos  flavors) and "Free Doritos" (co-workers throw a crystal ball into vending  machine in order to score some free Doritos, then run into trouble when  one of them accidentally throws the ball into their boss's nether regions) all come from professionals - not everyday consumers.

"Live the Flavor" came from Dale Backus and Wes Philips, professional  videographers with their own commercial production company. "Checkout  Girl" came from Kristin Dehnert, who is an award-winning filmmaker.

And the Herbert Brothers have their own production company, called Transit Films.

That's not to say these aren't grass roots efforts. In part one of our conversation, we learned that the Herberts only spent a couple hundred dollars, and produced the spot with a cast and crew of friends. In this case, the brothers Herbert were simply trying to break into the big time - which they did to hilarious effect.

My beef is not with the brands or contestants - the Pepsi Max/Doritos contest makes no pretension of everyday people winning. Rather, the contest is open to everyone and, if the spot's good enough, it might just win enough votes to go to the Super Bowl. Obviously, the best entries will be well produced. In other words, it's completely fair.

Rather, most media outlets frame such contests in general, and this contest in particular, as an example of how everyday people are beating ad industry professionals at their own game.

Which couldn't be further from the truth - though you'd never know it from most media accounts. It's often up-and-coming pros (and in some instances, established pros) just doing their thing.

As I recently told National Public Radio, "It's ironic, because the people who actually end up winning these things are the people who could probably build careers in advertising, if they aren't already."

In part two, we'll hear the Herberts' perspective on this - and what it means to the future of advertising.

“Through persuasive arguments and q&a’s with the major players in advertising, Mathieson makes an excellent case for greater creativity and outside-the-box thinking backed up with solid ideas.” – Publishers Weekly

Will check out the spot - best of luck, Jared!

Dave Herbert is a friend of mine. We were finalists together during the inaugural year of the CTSB contest. Dave comes from good stock. A real heartland, cornfed brother in arms, (though I'm from Pennsylvania originally and currently live in SoCal). Anyways, after passing on the CRASH 2010-2011, I decided to produce again for the contest this year. If you're interested in viewing it, here is a link to my 2011-2012 submission. http://www.crashthesuperbowl.com/#/gallery?video=10421