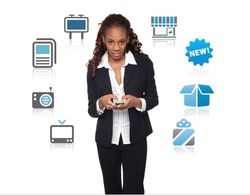 Mobile marketing is going to make some major moves in 2013 - just not how most imagine.

Following up on our list of Top 10 Mobile Marketing Initiatives of 2012, it's time to look at some trends we'll see emerge and/or evolve in the year ahead.

Among the most prominent (not necessarily in this order):

5. Mobile Advertising Picks Up Speed (For A Time)

According to Forrester Research, mobile ad spend will boom next year - to $15 billion. Why? Because consumers now spend 10% of their media consumption time on mobile devices, yet mobile attracts less than 10% of ad dollars. The firm reasons that the old school Internet's ad growth from 8% of spend to 22% of spend means mobile must follow course (even though marketers get less and less from that increased Internet spend). But, the firm says, even a small step toward closing the gap will mean big dollars for this medium.

I'm not completely convinced. As a marketer, I find mobile advertising a bore (even some of the newer, much hyped expandable ad units). As a consumer, I find it all a snooze fest.

Mobile's far more powerful than just trying to replicate ad models from the old school Internet and slapping them on a small screen of a phone, or even the larger screen of a tablet. But there's just too much potential revenues at stake so, in 2013 at least, mobile advertising will be a hot topic. Until it's someday not (or is at least recognized as one small, nearly insignificant sliver of the amazing things you can do with mobile). But as Ad Age points out today, 38% of clickthroughs in mobile are from fat, clumsy thumbs.

The pub goes onto talk about some ways mobile video and native mobile ads within apps like Foursquare may see success. But in my view, Coca-Cola's Re:Brief integrated campaign is probably the best example of mobile advertising combining with social & traditional media to work cohesively in a compelling manner.

And, as I write in my book THE ON-DEMAND BRAND, using mobile to not just promote but enhance your product - turn it into a mobile service, ala Nike+ and other successful initiatives - is what will define winners and losers in many categories next year and in the decade ahead.

4. QR Code Stores Proliferate (Just Not in The US)

QR code stores in subways and elsewhere seem to have been the surprise hits of 2012, and could seriously take off in 2013. According to shop2mobi, 300 of these virtual stores launched last year - and 2,000 have already been planned for the next 12 months. Still, while these are huge in South Korea, China, Germany and elsewhere, QR codes themselves still mostly elicit quizzical looks from consumers, when they generate any notice at all. I could easily see commuters in New York or San Francisco taking advantage of these kinds of offerings. But it may be a while before they stand any chance in most of the US - and by the time that happens, we'll probably be onto whatever will replace QR codes next.

Here's a winner: Use of mobile for customer loyalty programs like Starbucks'. Look for more brands to move beyond just using mobile to replenish cards to having mobile become the entire platform for loyalty. Look for transaction capabilities to advance, and adoption rates to follow suit.

In my piece the other day on social media trends for 2013, I point to early examples of this, including Vail Resort's Epic Mix app, which connects real friends in the real world in a highly social, physical world brand experience.

This past year, one look only at Heineken's personalized concert QR codes to see how ad hoc mobile + social + local branded experiences can take shape.

Look for more of this in the year ahead (especially as it pertains to things like social television viewing) - along with a new syllable, as we move from SoLoMo to SoLoMoCo with the addition of Co, which stands for Commerce. In a mobile roundtable I hosted this last August, SAP CMO Jonathan Becher and I discuss what this new dynamic might mean to brand marketers and retailers alike in the year ahead.

One look at my list of Top 10 Augmented Reality Initiatives 2012, and it's clear that AR - while quite gimmicky today - holds great promise for brand experiences via mobile and elsewhere. One of my favorite things about mobile AR is that it gets to the heart of the mobile ad debate.

In my view, mobile is far more powerful as an activation mechanism for communications we experience in other media - in print, television, radio, direct mail, outdoor and so on - than it is as an ad platform in and of itself. Mobile AR is an experience activated by the consumer, at his or her own initiative, at the point of communications impression. And it delivers something that literally can't be achieved in any other medium.

Not that many consumers are going to go download an AR app and start using it in 2013. But as standards emerge, these kinds of brand experiences will become more common - and will make up some of the cooler components of integrated campaigns in the year ahead.

For more on these and other digital marketing trends, be sure to pick up a copy of my book THE ON-DEMAND BRAND.