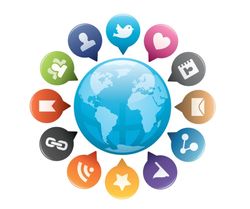 First up: Five big trends to look for in the world of social media marketing.

In the year ahead, look for an increasing number of social initiatives to move away from pure-play digital to the physical world. Coca-Cola has been a leader in this, with efforts like the Happiness Truck and Happiness Vending Machines, which engaged consumers in the physical world, and helped those consumers propagate the experience via digital.

You also saw Microsoft use branded mobile game apps like "Dance Cam" to engage in the physical world by enabling folks to create dance videos on their mobile phones and then share them.

And ad hoc physical world social networks will become commonplace. Look at efforts like Heineken's personalized QR codes for music festivals, where users can create their own customized QR code stickers that other attendees can scan to spark up conversation.

Factor in augmented reality, and "liking" things in the physical world will take on all-new forms.

In a world gone mobile, having a desktop presence or experience becomes increasingly irrelevant.

4. 'Presence' Takes A Backseat to Campaigns

As I write in my book THE ON-DEMAND BRAND, the first question to ask about social media is not "how?" It's "why?" When you think in terms of objectives, you begin to see the value of augmenting social "presence" - that much vaunted, ongoing conversation with consumers - with specific, short term and very actionable campaigns.

Look at Mercedes' "You Drive," a TV campaign that viewers could "drive" via Twitter. Or Mustang's "Dream Mustang" social media street fight. And of course, Coca-Cola's live social Super Bowl experience - in which the brand's popular polar bears comment on the game and ad bowl commercials in real time.

These are short-term efforts designed to engage consumers for a specific amount of time, around a specific promotion. Look for more of that in 2013, especially in the form of games.

We're all finding ourselves starting to unfriend "friends" who aren't really, well, friends in an effort to get as authentic in our online relationship building as we are offline. With growth rates for Facebook leveling off in mature markets, attrition may come to the fore. Already, a huge bulk of brand "likes" are from inactive accounts.

Perhaps it's no surprise that more brands are using social media to poke fun at social media instead of glorifying it. Mitsubishi's "Unpretentious" app enables you to run over your most annoying Facebook friends, for instance. And DKNY recently made fun of social media by creating a fake success story to build actual buzz through social media.

Indeed, I've said this before and I think it will continue in the year ahead: For some brands in some categories, a premium will be placed on how few friends and follows you have, instead of how many. Authentic, high quality connections will begin to mean far more to brands than mass, unqualified connections.

To engage consumers in social, marketers have largely turned to Facebook, Twitter, Pinterest, and so on - with good reason. You should reach consumers where consumers congregate. But as mentioned in trend #5, that doesn't mean in some desktop Internet experience anymore. It's the physical world.

One of my favorite examples actually emerged a few years ago, when Vail Resorts launched Epic Mix, a mobile app that enables groups of real friends to connect with one another while they're skiing. They can see where their friends are physically on the slopes. They can automate status updates based on those activities. They can earn points that they can redeem back at the lodge. And once they're back home, they can review their performance and share it with the broader community.

One need only look at PlayStation Home, AMEX OPEN, and Johnson & Johnson's BabyCenter to see that social media is about lot more than Facebook & Twitter - and that brands can be the enabler of community, instead of just a participant.

In 2013, more brands will begin to realize that social platforms like Facebook and Twitter have profound value for reaching people over the age of 40, the fastest-growing segment of users. But millennials use social far differently.

I'll put it this way. If a parent wants to know what a teen wants them to know about, check out the teen's Facebook page. To find out what a teen is really up to, check his or her text messages.

As the Pew Internet and American Life Project reported this year, 63% of teens say texting is their preferred mode of communication on a daily basis, compared to just 29% for social media sites (regardless of which device they're accessed on).

Teens just aren't as into sharing their lives with the world as adults think they are. They're far more interested in closed loop systems like text messaging where they can connect with friends - and, sometimes, the brands they know and trust.

To read more about these and other emerging trends, be sure to pick up a copy of my book THE ON-DEMAND BRAND.

“In 2013, more brands will move beyond viewing social media as a cool way to connect with consumers…” – That is a very bold prediction, Rick. But I think that phenomenon could happen, especially with the continuous integration of social media platforms in brand marketing. And with further advancement, the target audiences who share the same passion will interconnect thru brand and social media. And I think that is what you call the “Global Village.”