🎄It's a super-sized game of Loaded Questions as the Ricks celebrate the season that tried to make lemonade out of one lemon of a year.

🍔When a certain QSR brand's campaign for freshness is solid mold (at 2:48)

🧟‍♂️The Ricks do science near you, and the results are scary (at 4:30)

😲Could this unfortunately-timed ad campaign benefited from a temporary rebrand? (at 6:12)

🤖Arnie's "Terminator" takes on an unexpected new role–and casting trivia from the OG (at 7:02)

💇‍♂️Rick W. wins a Golden Flowbee during lockdown—and finds himself in esteemed company (at 7:52)

🤘🏻From "Sex Education" to "Finger-Licking Vegan Nuggets" to fMRI and beyond (at 9:48)

🤣 Some memorable moments from Season 3 of Rick and Rick Rule the World (at 15:14)

📺 It's a super-sized game of Rick and Rick Loaded Questions about some of this year's biggest Super Bowl commercials. Who scores? Who fumbles? And which spots do you remember best? It's an AdBowl 2020 pop-quiz with a Rick and Rick twist.

Brought to you by TaskinSF.com, the official sponsor of awesome 🛩

🍎 In a first, Steve Wozniak is mentioned in a conversation about the Super Bowl (at 2-min, 2-sec)

🍫 #SnickersFixTheWorld: Who knew the solution to all our problems was to feed the Snicker's Hole? (...anyone besides us, that is) (at 4:56)

💑 Google monetizes an old man's memories in a moving spot (at 5:58)

🏚 Met Life sends you four different kinds of love—'cuz you're going to need it (at 8:20)

Listen via the player embedded above, or click here:

Approx. 18 minutes, 26 seconds. For US audiences. Review cookie and privacy policies for iTunes, Spotify, Soundcloud and all other streaming services.

Posted at 04:28 AM in Advertising, Media Culture, TV, Viral | Permalink

🎄 "The Free Guy." Coke Zero bottles wage an OLED-based lightsaber battle. Netflix makes it safe for other nice brands to make the naughty list on Twitter. ''The Crisis on Infinite Earths" has begun. The Peloton Wife gets a new beginning—thanks to Aviation Gin. The 5 fastest-growing brands of 2019, and more. From December 8.

Welcoming our new sponsor, Taskin—the first name in stylish, premium-quality travel gear—taskinsf.com (at 1 minute 32 sec)
💊 Blue Pill, Red Pill: DC or Marvel? McDonald's or Taco Bell? Rick W. has a surprising answer (at 2:55)
🎬 Ryan Reynold's "The Free Guy" trailer drops, and the Ricks are here for it (at 3:56)
💥 "The Crisis on Infinite Earths"—the mother of all TV crossovers has officially begun (at 5:57)
📣 Netflix tweets, "What's something you can say during sex, but also when you manage a brand Twitter account"—you won't believe how other brands respond (at 8:43)
🍸 The Peloton Wife gets a new beginning—courtesy of Aviation Gin (at 10:25)
⚔️ Coke Zero bottles use OLED diodes to wage a lightsaber battle between Rey and Kylo Ren (at 12:18)
📈 Door Dash, Impossible Foods, White Claw, Postmates and ?—the 5 fastest growing brands of 2019 (at 13:37)
🧒🏼 👴🏼 Which brands win most with Millennials and Boomers? (at 14:24)
🎅🏼 Which CPG brand helped create Santa as we know him today? (at 15:19)
Listen on iTunes—or download:

Approx. 17 minutes, 32 seconds. For US audiences. Review cookie and privacy policies for iTunes, Spotify, Soundcloud and all other streaming services.

🎁 Cybertruck Blows Up The Internet, The Lightsaber That ... Meows? And More

🎅🏼 Tesla's Cybertruck takes the Internets by storm, and not all goes well. The holiday yule log gets spit-roasted—ASMR style. Our Top 3 Tech Toys Gone Wrong. The 'Christmas Pizza' that's covered in turkey and gravy—and served in a singing box, plus a whole lot more.
🚀 Rise of Skywalker: How will this chiasmus conclude the chiasmi? (at :42 seconds)
📺 What the hell is The Mandalorian? And why isn't that Boba Fett and Yoda? (at 2:28)
📐 Tesla Cybertruck: Big splash, or botched launch? (at 3:45)
🔫 Our Top 3 Tech Toys for Holiday 2019—including a Lightsaber that … meows? (at 6:30)
💣 Our Top 3 Tech Toys Gone Wrong—including one inspired by Tesla (at 8:30)
🍕 The Christmas Pizza comes lathered with turkey, gravy, and a psychotic theme song (9:54)
🥩 The Beef Drool Log comes with ASMR-like sound effects and … an AI-based personal assistant?  (at 11:15)
🎄 Cardi B or Anna Kendrick? Will the holiday TV spot imposter please stand up? (at 12:25)
🛍 From Santa's WTF workshop: animal dissection kits, fluffy pets with removable fur and other gifts for children (at 13:18)
☃️ Some holiday chestnuts about goosing the kids, making memories and more (at 14:00)
🥁 The Ricks reveal the title of their future Claymation holiday television special (at 14:58)
OR:

Approx. 15 min, 40 sec. For US audiences. Review cookie and privacy policies for iTunes, Spotify, Soundcloud and all other streaming services.

Singles Day scores $1 billion in its first :60-seconds. "Arson Frog" and "Okay Boomer" have meme warfare raging among generations. Plus: Twinkies cereal ignites a social media storm, what fMRI tells us about holiday shopping behaviors, why the future of VR may stink, Loaded Questions, and more.

🥣 Twinkies for Breakfast: Social Media Cause Célèbre—or Cereal Offender?  (at 10:08)

🧠 What fMRI Brain Scans Tell Us About True Shopping Influencers (at 13:50)

Approx. 16 min, 5 sec. For US audiences. Review cookie and privacy policies for iTunes, Spotify, Soundcloud and all other streaming services.

The Loaded Questions keep flying as we recall some of our favorite memories from Season 2 of Rick and Rick Rule the World.

🧠 The technical name for the psychological effect Coke uses in those ads - it's SCIENCE (at 1 min, 09 sec)

🏰 The Top 3 "Game of Thrones" character names parents are giving their newborns (at 3:17)

☕️ How ingesting too much of a good thing can go bad fast (unless it's Ricks Pez candies, of course) (at 6:28)

🐉 The Ricks nail their rendition of "Never Ending Story," the sex lives of Muppets, pre-Internet gaming, still obsessing about Shamrock Shakes, the trouble with time capsules and more (at 10:33)

Listen through the embedded player, on iTunes, or by downloading here.

Approximately 14 min, 45 sec. For US audiences. Review cookie and privacy policies for SoundCloud, iTunes, Spotify, and all other streaming services.

Pearl Jam's out to party like it's 2062. Booze wants to be the new wellness drink. Gillette's "First She." Man-size Kleenex and more.

For US audiences. Review cookie and privacy policies for Soundcloud, iTunes, Spotify and all other streaming platforms.

We get in touch with our inner Pre-Cogs as we reveal our top three predictions for digital marketing , media, and more in the year ahead. That's right: It's our 2nd Annual Predictions Episode, and if our recent Predictions Scorecard episode is any indication, this is an episode you don't want to miss! From March 7.

🤖 Is MarTech cruising on autopilot, or in for a turbulent reality check this year? (at 7:07)

📚Will marketing go old-school in the months ahead? And what would that even mean? (at 8:35)

📣 Will 'Deep Fakes' mean real headaches for business and society this year? (at 10:34)

🛒 Will shortsighted C-suites give up on CX initiatives in a softening economy? (at 15:08)

For US audiences only. Be sure to review cookie and privacy policies for Apple, SoundCloud, or anywhere else you listen and/or download Rick and Rick Rule the World.

Barbie's Out to End 'Dream Gap' for Girls (Podcast)

In the Season Two Premiere of Rick & Rick: How Mattel's Barbie wants to put an end to the "Dream Gap" for girls, McDonald's Gets all Banksy on us, and a whole lot more.

From the McNutty Department: McDonald's get all McBanksy on us (at 7:30)

Brands and politics don't mix? A YouGov consumer survey begs to differ (at 11:00)

(From last month. For US audiences only. See Soundcloud cookie/privacy policies.) 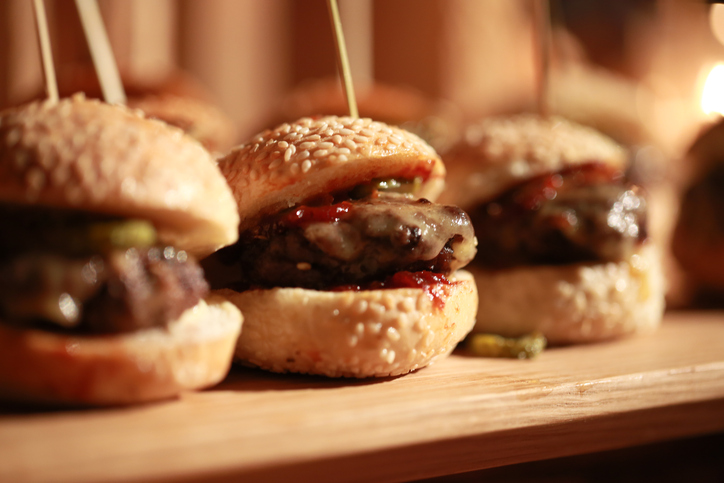 Riddle us this, and then riddle us some more:

1. White Castle VP of Marketing Kim Bartley recently admitted to which of the following:

A.  Preferring Big Macs to Sliders

B.  Spending a night binging on a Castle Pack of waffle sliders, fish nibblers and beer

C. Spending a year as a vegetarian

D. Spending too much on a new Maserati

According to Ad Age, White Castle CMO Kim Bartley admitted to recently spending a year as a vegetarian after White Castle's failed attempt to add salads and so-so results for a veggie slider. But it helped pave the way, apparently, for the far more successful Impossible Slider, which is made of a meat-like substance that's meat-free.

2. Last seen during the Super Bowl, this CPG brand campaign has made a return visit to the NFL during Thursday night football:

B. Tide "It's a Tide Commercial"

Tide is bringing "It's a Tide Commercial" to football fans. Because you know football fans are deeply concerned about their laundry detergent .

3. This Halloween, US consumers are expected to:

A. Tune in for the 29th edition of the Simpson's "Halloween Treehouse of Horror"

B. Tune in for the 30th edition of the Simpson's "Halloween Treehouse of horror

E. All the above, except for A

F. All the above, except for D

All of the above except for A. This is the 29th edition of the Simpson's "Halloween Treehouse of Horror," and according to the National Retail Federation, US consumers will spend $3.2 billion on Halloween costumes. Plus: they will spend $2.6 billion on candy—including Snickers, Reese's, M&M and such novelty candies as Coffee Makes Me Poop Gum, Bacon and Cheese Flavored Crickets, and National Embarrassmints. In all, US consumers will send $9 billion on Halloween crap this year.

4. According to a recent ADWEEK article entitled, "How Mr. Rogers Taught Me Everything I Need to Know about Marketing," which of the following is not one of those pearls of wisdom:

A. Be inclusive of ideas, differences of opinion and ways to get things done

B. Learn to apologize for hurt feelings, misunderstandings and problems requiring remediation

C. Learn to apologize for your stupid ideas

D. Learn to apologize for your stupid ideas, especially the one you had last week

E. Both C and D, but definitely not A and B

The article included such Mr. Rogers-inspired advice for marketers as, "Be inclusive if ideas, differences of opinion and ways to get things done;" "Learn to apologize for hurt feelings, misunderstandings and problems requiring remediation;"as well as "Don't ever be afraid to admit you don't know," "Be kind," and more.

5. A new consumer gadget called Portal is which of the following:

C. A new video chat device from Facebook that uses AI to react to callers' movements by automatically panning in and zooming out and adjusting sound levels

D. A new chat device from Facebook that uses Amazon Alexa, thereby positioning the devices as competitors to Google Home and Apple's HomePod.

F. A, C, D and B depending on your point of view

Portal is a new video chat device from Facebook that could transform chat and even social media by bringing it into the living room. Or maybe it's this year's version of the Facebook Phone that took the nation by storm. It uses AI to react to callers' movements by automatically panning in and zooming out and adjusting sound levels. It also uses Amazon Alexa, thereby positioning the devices as a competitor to Google Home and Apple's HomePod. Given the fun we've all had with Cambridge Analytica and other incidents in recent times, it could very well be the second sign of the Apocalypse, depending on your point of view.